Summaries for the Public from recent articles in Clinical Thyroidology 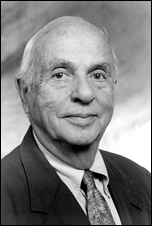 On June 10, 2019, Dr. Lewis E. Braverman passed away at the age of 90, leaving a tremendous legacy in the thyroid field. Dr. Braverman was born in Quincy, MA and graduated from Milton Academy and Harvard College. He received his MD from Johns Hopkins University School of Medicine, followed by a Residency at Boston City Hospital and an Endocrinology Fellowship under the direction Sidney H. Ingbar, MD in the Thorndike Memorial Laboratory, the first clinical research laboratory in a city hospital in the country. He was Chief of Endocrinology at St. Elizabeth’s Hospital in Boston, founding Director of Endocrinology and Chief of Nuclear Medicine at the University of Massachusetts Medical Center in Worcester and Chief of Endocrinology, Diabetes and Nutrition at Boston Medical Center/Boston University. He actively saw patients in the Endocrine clinic at Boston Medical Center until January 2018 when he retired from clinical practice at the age of 88.

Dr. Braverman was a prolific thyroid researcher with >600 publications in many leading clinical and research medical journals. He served on many NIH study sections and advisory committees and was the Principal Investigator on several long-standing clinical and research studies. His seminal demonstration that thyroxine was converted to triiodothyronine in humans was published in the Journal of Clinical Investigation in 1970. In 1982, he identified a new genetic disorder, familial dysalbuminemic hyperthyroxinemia, that could be confused with thyrotoxicosis. In 1987, he discovered the etiology of an outbreak of thyrotoxicosis in the midwest was due to the inclusion of cow thyroid gland in several meat processing plants in the manufacturing of hamburger. This discovery led to a change in meat processing. He was an international expert in iodine metabolism, most recently publishing the results of iodine nutrition studies in Haiti in 2018 and in Armenia (currently in press). He was longtime co-editor of the leading thyroid textbook, The Thyroid: A Fundamental and Clinical Text, and was actively working on the 11th edition at the time of his death.

While Dr. Braverman led an illustrious academic career and owns a place with the giants in the field of Thyroidology, his most important legacy is the more than 70 fellows he has directly mentored as well as the hundreds others who have passed through his laboratory and his clinic over the years. He dedicated his life to his passion for training and supporting fellows, residents, students and junior faculty. He encouraged them along their lifelong journey of gaining knowledge and expertise while fostering the joy and satisfaction that led all of us to pursue medicine and science as a career, not only in the field of Thyroidology, but in all aspects of medicine. The leadership and guidance he provided to his fellows over his career inspired a lifelong drive for excellence in all our endeavors. In honor of his lifetime of mentorship, the American Thyroid Association established the Lewis E. Braverman Distinguished Award Lectureship in 2011. This award “recognizes an individual who has demonstrated excellence and passion for mentoring fellows, students and junior faculty; has a long history of productive thyroid research; and is devoted to the ATA”. It was his passion for mentoring fellows, students and junior faculty that most defined Dr. Braverman and truly places him among the giants.

Despite his prodigious research career, Dr. Braverman always maintained an active clinical practice. His clinic notes were always handwritten and he never gave in to the electronic demands of current day clinical documentation. However, when disaster struck a few years ago and the computer systems went down for ~1 week, he was the only individual who did not miss a beat in seeing his patients, since all of his notes were in his shadow charts! He also called all of his patients personally with their test results, usually starting ~6AM on Sunday mornings!

He was beloved by his patients, who were devoted and loyal to him, with many following him as he moved to various institutions during his career. After the news of his retirement from clinical practice became known, our office frequently received “fan mail” for Dr. Braverman. The notes and letters inside were not simply expressions of well wishes and thanks from his patients, but were tributes to his skill, his kindness and sincerity, to the way he made them feel cared for and the lovely way he had of inserting himself into the lives of the people around him. They expressed appreciation that he knew the names of their children and grandchildren, that he inquired about other aspects of their lives besides their health and, of course, wrote of how very much they would miss him.

Not only did his patients grieve the loss of having him in their lives, but his staff did as well. Regardless of how busy the clinic was, Dr. Braverman always took the time to thank those who supported him at work. He asked about their families, told them how much he appreciated their help and always advocated for them to managers and leaders. In return, they adored him and always made an effort to make his clinic sessions go as smoothly as possible. These relationships, not just with colleagues and trainees, but also with his patients and staff are what made him the truly special and unique man we all miss.

I would like to end on a more personal note. Over the years, my in-laws would frequently cite “Dr. Braverman” when dispensing medical advice. The Dr. Braverman in question was Dr. Harry Braverman, Lew’s father who was a general practitioner in Quincy, MA. My in-laws lived in Quincy for a short time where Harry Braverman delivered my wife’s older brother and sister. While my in-laws had Dr. Harry Braverman as their doctor for only 6 years, he became their gold standard for a physician throughout their lives. With this legacy as a father, it is no wonder that Dr. Lewis Braverman became the “gold standard” of a researcher, clinician, director and mentor for all of us.

He will be deeply missed as a confidante, advisor, colleague, mentor, physician and, most of all, as my very dear friend.