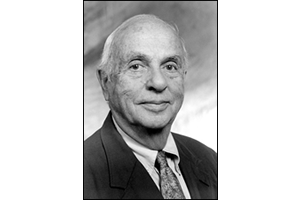 The ATA is saddened to report the death of Lewis E. Braverman, MD. He was an undergraduate at Harvard College and graduated from medical school at Johns Hopkins University in 1955, followed by an Internal Medicine Residency at Boston City Hospital and an Endocrinology Fellowship under the direction of Sidney H. Ingbar, MD in the Thorndike Memorial Laboratory. He was a longtime thyroid clinician, beloved by his patients, many of whom followed him as he moved to various institutions during his career. He retired from clinical practice in 2018 at the age of 88.

Dr. Braverman was a prolific thyroid researcher with >600 manuscripts. His seminal demonstration that T4 was converted to T3 in humans was published in 1970 with co-investigators Sid Ingbar and Ken Sterling. He also identified familial dysalbuminemic hyperthyroxinemia in 1982 and, in 1987, discovered the etiology of an outbreak of thyrotoxicosis in the Midwest was due to the inclusion of bovine thyroid gland in several meat processing plants in the manufacturing of hamburger. He was an international expert in iodine metabolism, most recently publishing the results of iodine nutrition studies in Haiti in 2018 and in Armenia (currently in press). He was longtime co-editor of the leading thyroid textbook, The Thyroid: A Fundamental and Clinical Text and was actively working on the 11th edition at the time of his death.

Most of all, Dr. Braverman is remembered as a superb mentor to generations of endocrine trainees. In 2011, in honor of his lifetime of mentorship, the ATA established the Lewis E. Braverman Distinguished Award Lectureship, which recognizes an individual who has demonstrated excellence and passion for mentoring fellows, students and junior faculty; has a long history of productive thyroid research; and is devoted to the ATA. He extended his warmth and kindness to all those he met at work, clinic, hospital, and the ATA.

It was his passion for mentoring fellows, students and junior faculty that most defined Dr. Braverman and truly places him among the giants.

Dr. Braverman is survived by his wife Mimi, his sons William and Daniel and by five grandchildren.