A 69 year old woman was found to have hypothyroidism and a goiter on preoperative evaluation before foot surgery in 2010. She was otherwise well and had no family history of thyroid disease. She was referred for endocrinologic evaluation when the goiter enlarged significantly over a one month period, and within 6 months, she reported new onset of dysphagia and neck discomfort. Ultrasound and CT scan (Fig. 1) of the neck showed an enlarged and heterogeneous thyroid gland, particularly involving the right lobe which extended inferiorly into the superior mediastinum. There was mild tracheal shift to the left and possibly mild tracheal narrowing. This patient went for thyroidectomy 6 months after initial presentation. The operative report described the gland as adherent to both recurrent laryngeal nerves (RLN), trachea and esophagus with involvement of strap muscles and the right internal jugular vein. The thyroid weighted 67 grams. Surgical pathology reported multifocal undifferentiated thyroid carcinoma with multiple foci of lymphovascular invasion, extracapsular tumor extension and an incidental microscopic nodule with follicular variant papillary thyroid carcinoma (Figs. 2, 3). Three central neck lymph nodes were replaced by undifferentiated thyroid cancer. Immunostains were strongly positive for thyroglobulin, TTF-1, and vimentin confirming the thyroid origin of the tumor. The slides were sent for expert opinion to Dr. Juan Rosai who categorized the tumor as undifferentiated rather than poorly differentiated stating, “it is worse looking than usual poorly differentiated carcinoma, although clearly epithelial and not as sarcomatoid as anaplastic carcinoma.” The patient has had persistent postoperative hypocalcemia and required a tracheostomy due to RLN injury. One month after surgery her thyroglobulin (Tg) was 3,000ng/mL with negative TgAb). 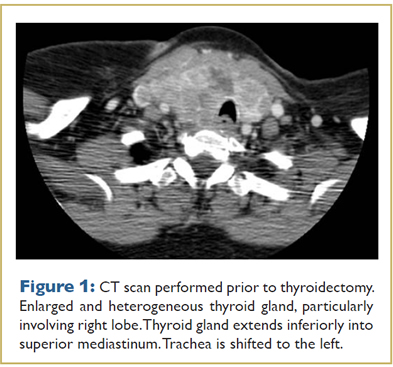 Postoperatively, a PET/CT scan (Fig. 4) showed hypermetabolic uptake in the thyroid bed, right cervical lymph nodes and multiple lung nodules. She was treated aggressively for Stage IVC (T4b,N1,M1) anaplastic carcinoma with postoperative external beam radiation (EBRT) to the head and neck followed by chemotherapy. EBRT included 68 Gy in 34 fractions directed to residual gross disease in her neck and 50 Gy in 25 fractions to uninvolved areas within the radiation field in the bilateral neck and upper thorax from the chin down to aortic arch. She then received 6 cycles of taxol and carboplatin. CT imaging after treatment demonstrated shrinkage of multiple small lung nodules and near-complete resolution of a right paratracheal soft tissue mass as well as right middle lobe lung nodule.

One year after surgery, EBRT, and chemotherapy, her Tg was 143ng/mL (negative TgAb) and the largest lung metastasis measured 5mm. By 15 months after the initial treatment, the Tg increased to 197ng/mL and repeat PET/CT imaging of the lungs demonstrated an increase in number, size and FDG avidity of the lung nodules. The patient was then referred for radioiodine treatment (RAI) with 200 mCi. The reasons for use of RAI were 1) the spectrum of pathology, including remnants of FV-PTC in addition to undifferentiated histology, 2) Tg continued to be produced suggestive that there is a component of differentiated thyroid carcinoma within the tumor, and 3) overall treatment options were limited. The post-treatment whole body scan demonstrated uptake in the neck, but not in the lungs. Interestingly, over the following 6 months, her Tg decreased to 64 ng/mL and lung nodules also decreased in size from 7 mm to 5mm.

Serial imaging every 3 months since the Tg nadir has revealed lung metastases that have increased in size up to 8 mm from 5 mm in the prior year. FDG uptake was not seen on repeat PET imaging which may have been due to poor preparation. Additionally, the Tg increased to 347ng/mL. 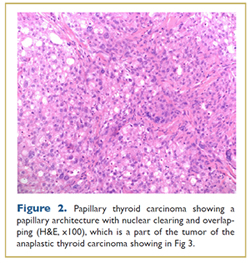 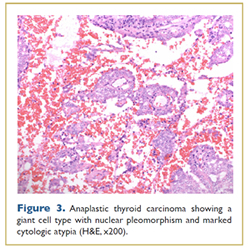 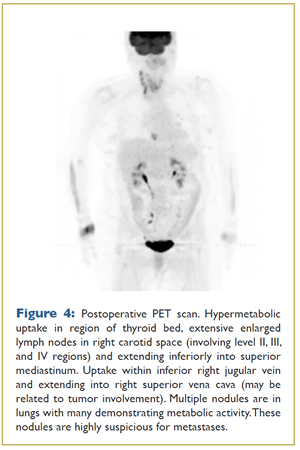 While anaplastic thyroid carcinoma (ATC) is not common, comprising just 1-2% of thyroid cancers, it has a dismal prognosis and accounts for up to 39% of thyroid cancer deaths with a median survival of 6 months (1). The peak incidence of ATC occurs in the sixth and seventh decades of life with a female/male ratio of 5 to 1 (2). Most patients with ATC present with a rapidly enlarging anterior neck mass accompanied with dysphagia (40%), voice change (40%), and stridor (24%). ATC is usually advanced at the time of diagnosis with up to 50% of patients having distant metastases at the time of diagnosis (2). On the one hand, our patient had a classic initial presentation of ATC with a rapidly enlarging mass, dysphagia, and distant metastases. On the other hand, the biological behavior of her malignancy is not typical since she is still alive and asymptomatic 3 years after diagnosis. While the tumor pathology is consistent with an undifferentiated carcinoma, clinically, there has been relatively slow progression of disease. In addition, her tumor (or at least a part of the tumor) has demonstrated a response to radioactive iodine, also uncommon for ATC. It suggests that her cancer arose as a dedifferentiation from a pre-existing more well-differentiated tumor. ATC may derive “de novo” or from pre-existing papillary or follicular thyroid carcinoma. Gene mutations seen in well-differentiated thyroid cancers such as BRAF and RAS are also seen in ATC. Other mutations contributing to the molecular pathogenesis of ATC include p53, catenin (cadherin-associated protein), beta 1, PIK3CA, AXIN1, PTEN, APC genes and chromosomal abnormalities (3). Genetic alterations in the p53 tumor suppressor gene on chromosome 17p are the most frequent mutation in ATC (55%) resulting in tumor growth, angiogenesis and dedifferentiation. These molecular markers hold promise as potential therapeutic targets.

The American Thyroid Association guidelines for the management of anaplastic thyroid carcinoma stress the importance of discussing with the patient the overall goals and preferences of therapy since treatment for ATC can have many significant side effects. (4) An aggressive multidisciplinary team approach with multimodal therapy is a reasonable option. A recent publication assessed overall survival in a cohort of 2742 ATC patients from the National Cancer Database (5). Patients who received intensive therapy including surgery, radiation and chemotherapy had the longest median overall survival in Stages IVA (11.2 months), IVB (9.9 months) and IVC (4.9 months) when compared to those who did not receive multiple treatment modalities. Although the results demonstrate a significant difference, the actual length of prolonged survival was marginal.

Our patient is an otherwise healthy 69 year-old woman with ATC who has expressed a strong desire to pursue all treatment modalities available to treat her cancer. While she remains asymptomatic, her disease is progressing, albeit more slowly than a typical ATC. She has already undertaken multiple treatment modalities including surgery, external beam radiation therapy, systemic chemotherapy and RAI treatment. Current therapeutic options are limited. A second dose of RAI may treat the better-differentiated part of her disease, but likely will not slow the progression of the RAI resistant tumor. In a phase II clinical trial using sorafenib for ATC, 2 of 20 patients (10%) responded to the drug and 5 of 20 patients (25%) showed stable disease for median duration of 4 months (range 3-11 months) (6). Rosove reports that a 51 year old male patient with a BRAF V600E positive ATC treated with vemurafenib demonstrated a dramatic regression of metastases (7). These drugs are off-label options for our patient; ideally, identifying the specific gene alterations in her tumor may permit targeting it with one or more chemotherapeutic agents against the tyrosine kinase signaling pathway and/or the neoangiogenesis signaling cascade. Unfortunately, this is not yet possible.