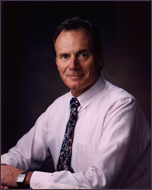 Dr. Ridgway was an ATA leader for many years, having served on the Board of Directors and as president of the society in 1996-1997. Dr. Ridgway was also a past-president of the Endocrine Society (2003-2004). He was awarded the inaugural Lewis E. Braverman Lectureship Award in 2011 which recognizes a member of the ATA who has demonstrated excellence and passion for mentoring fellows, students, and junior faculty and has a long history of productive thyroid research. He served in numerous capacities within the ATA, including as a member of the Board of Directors, a committee chair, and a member of various committees.

At the University of Colorado School of Medicine Dr. Ridgway held several key positions over the years, including Executive Vice Chair Medicine, Frederic Hamilton Professor of Medicine and Senior Associate Dean for Academic Affairs. He came to the University of Colorado in 1985 to become Head of the Division of Endocrinology, Metabolism, and Diabetes, and he served in that capacity until 2007. Previously, he was Head of the Thyroid Unit at Massachusetts General Hospital, in Boston.

His research centered on thyroid stimulating hormone and its regulation of the thyroid gland, focusing specifically on the development and regulatory factors that control the alpha and beta subunits of thyroid stimulating hormone. He also extensively studied the role of thyroid hormones in altered cardiac, brain, pulmonary, skeletal muscle, hepatic, and adipocyte function associated with disorders of the thyroid gland and the identification of therapeutic strategies.

Throughout his career, Dr. Ridgway excelled in his role as a mentor and has influenced many individuals in the field that have gone on to assume leadership positions. Many fellows and trainees have benefited from the opportunity to work directly with Dr. Ridgway and he worked closely with the clinical fellows that attended the annual University of Colorado Endocrine Fellows Conference which he founded, organized and chaired for 20 years, held just before the ATA Annual Meeting. He encouraged many endocrine fellows to participate in this annual event and to become active ATA members. Chip shared his expertise and passion for the field of thyroidology with many young physicians and research assistants, inspiring them to pursue careers in endocrinology.

He will be deeply missed as a friend, colleague and mentor.

We invite members of the ATA community to leave notes and remembrances for the family.