WHAT IS THE THYROID GLAND?

The thyroid gland is a butterfly-shaped endocrine gland that is normally located in the lower front of the neck. The thyroid’s job is to make thyroid hormones, which are secreted into the blood and then carried to every tissue in the body. Thyroid hormones help the body use energy, stay warm and keep the brain, heart, muscles, and other organs working as they should.

HOW DOES THE THYROID GLAND FUNCTION?

The major thyroid hormone secreted by the thyroid gland is thyroxine, also called T4 because it contains four iodine atoms. To exert its effects, T4 is converted to triiodothyronine (T3) by the removal of an iodine atom. This occurs mainly in the liver and in certain tissues where T3 acts, such as in the brain. The amount of T4 produced by the thyroid gland is controlled by another hormone, which is made in the pituitary gland located at the base of the brain, called thyroid stimulating hormone (abbreviated TSH). The amount of TSH that the pituitary sends into the bloodstream depends on the amount of T4 that the pituitary sees. If the pituitary sees very little T4, then it produces more TSH to tell the thyroid gland to produce more T4. Once the T4 in the bloodstream goes above a certain level, the pituitary’s production of TSH is shut off. In fact, the thyroid and pituitary act in many ways like a heater and a thermostat. When the heater is off and it becomes cold, the thermostat reads the temperature and turns on the heater. When the heat rises to an appropriate level, the thermostat senses this and turns off the heater. Thus, the thyroid and the pituitary, like a heater and thermostat, turn on and off. This is illustrated in the figure below. 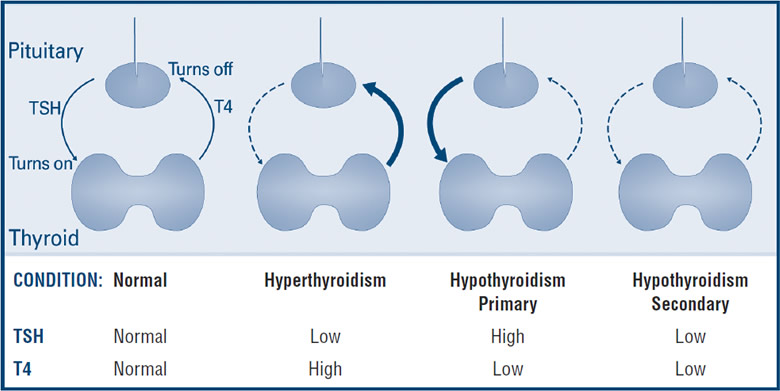 T4 and T3 circulate almost entirely bound to specific transport proteins. If the levels of these transport proteins changes, there can be changes in how much bound T4 and T3 is measured. This frequently happens during pregnancy and with the use of birth control pills. The “free” T4 or T3 is the hormone that is unbound and able to enter and affect the body tissues.

Blood tests to measure these hormones are readily available and widely used, but not all are useful in all situations. Tests to evaluate thyroid function include the following:

T4 TESTS
T4 is the main form of thyroid hormone circulating in the blood. A Total T4 measures the bound and free hormone and can change when binding proteins differ (see above). A Free T4 measures what is not bound and able to enter and affect the body tissues. Tests measuring free T4 – either a free T4 (FT4) or free T4 index (FTI) – more accurately reflect how the thyroid gland is functioning when checked with a TSH.

T3 TESTS
T3 tests are often useful to diagnosis hyperthyroidism or to determine the severity of the hyperthyroidism. Patients who are hyperthyroid will have an elevated T3 level. In some individuals with a low TSH, only the T3 is elevated and the FT4 or FTI is normal. T3 testing rarely is helpful in the hypothyroid patient, since it is the last test to become abnormal. Patients can be severely hypothyroid with a high TSH and low FT4 or FTI, but have a normal T3.

FREE T3
Measurement of free T3 is possible, but is often not reliable and therefore not typically helpful.

REVERSE T3
Reverse T3 is a biologically inactive protein that is structurally very similar to T3, but the iodine atoms are placed in different locations, which makes it inactive. Some reverse T3 is produced normally in the body, but is then rapidly degraded. In healthy, non-hospitalized people, measurement of reverse T3 does not help determine whether hypothyroidism exists or not, and is not clinically useful.

The immune system of the body normally protects us from foreign invaders such as bacteria and viruses by destroying these invaders with substances called antibodies produced by blood cells known as lymphocytes. In many patients with hypothyroidism or hyperthyroidism, lymphocytes react against the thyroid (thyroid autoimmunity) and make antibodies against thyroid cell proteins. Two common antibodies are thyroid peroxidase antibody and thyroglobulin antibody. Measuring levels of thyroid antibodies may help diagnose the cause of the thyroid problem. For example, positive anti-thyroid peroxidase and/or anti-thyroglobulin antibodies in a patient with hypothyroidism result in a diagnosis of Hashimoto’s thyroiditis. While detecting antibodies is helpful in the initial diagnosis of hypothyroidism due to autoimmune thyroiditis, following their levels over time is not helpful in detecting the development of hypothyroidism or response to therapy. TSH and FT4 are what tell us about the actual thyroid function or levels.

A different antibody that may be positive in a patient with hyperthyroidism is the stimulatory TSH receptor antibody (TSI). This antibody causes the thyroid to be overactive in Graves’ Disease. If you have Graves’ disease, your doctor might also order a thyrotropin receptor antibody test (TSHR or TRAb), which detects both stimulating and blocking antibodies. Following antibody levels in Graves’ patients may help to assess response to treatment of hyperthyroidism, to determine when it is appropriate to discontinue antithyroid medication, and to assess the risk of passing antibodies to the fetus during pregnancy.

There are many medications that can affect thyroid function testing. Some common examples include:

From Clinical Thyroidology for the Public: While it is clear that overt hypothyroidism in the mother…
Read More
More Articles on Thyroid Function Tests

For information on thyroid patient support organizations, please visit the Patient Support Links section on the ATA website at www.thyroid.org